We are super-happy today, because we are bringing back Laura Pérez to our blog. Aside from illustraiting for clients such as The Washington Post, Vanity Fair, or National Geographic (among others), Laura just published "Ocultos" with Astiberri, and we talked with her to know everything about her new comic-book.

Before talking about "Ocultos", and just in case someone still does not know about you: Who is Laura Perez?

Laura is someone who draws every day, because years ago she found out that was the thing she was best at. I work as an Illustrator since I finished my college degree, and more recently I work on comics/graphic novels, too.

Ocultos is your second graphic novel (after "Náufragos", where Pablo Monforte wrote the script), but is the first time you are in charge of everything. Where does this new idea and story come from?

The idea has been around my mind for some time. After publishing "Naúfragos" I felt more than ever the urge to tell my own stories, with my own voice. Working on commercial illustration, or illustrating other people's script, you always tell a story from an already built basis. I needed to find out a whole narrative voice of my own.

Mystery and the Occult always have interested me. I grew up with stories about spirits, psychic weirdness and other phenomena that, looking back, was not normal at all. But it wasn't until now that I decided to use that atmosphere to tell small stories that refer to these themes. 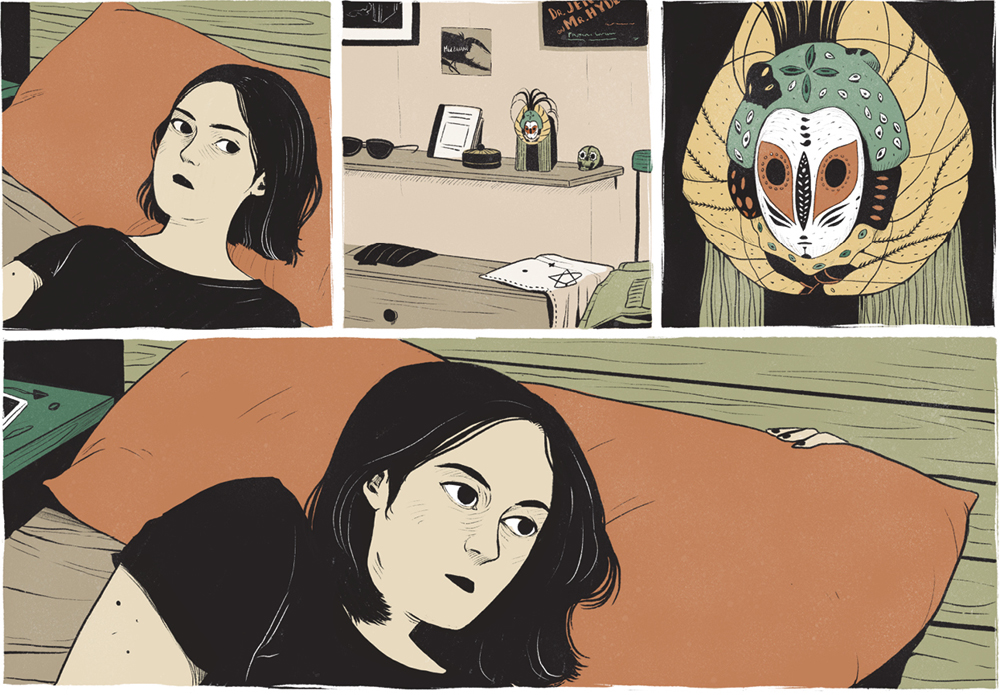 After reading "Ocultos", it felt very much in the symbolist tradition of Marcel Schwob's short stories, but with your own imaginarium and personality. A lot of the short stories in the comic book are silent, or barely have text. What made you take that approach, which is a bit inusual on comic-books?

I think I may be more influenced by cinema than by other comic-books. I love all kinds of cinema, but specially silent films and experimental narratives. You can tell a lot on scene without using words, and I love that.

I also like playing with slow paces, and setting some "slow motion" key moments, as if weirdeness made everything stop. And that happens to us when we experience time as fast or slow. Mental time is a very subjective matter, and you can show that in a comic-book very effectively.

Your stories are full of ghosts, aliens, and other worlds, but also day-to-day details and human sensations (like loneliness). Where these ideas come from, and how your worked on them and selected them to include in the collection?

It seems that when we talk about ghosts or aliens we put that in a drawer, and when we talk about other human experiences we put that in another whole separate drawer because you talk more about the day-to-day ones. I think all stuff is related to human perception and experiences. Some people have lived weird situations during ther lives: maybe they talked about them or not, but to some extent we all have lived a situation where something didn't quite fit with what we've been told traditionally on books or school.

That's where the ideas in the comic book come from: talking about we don't see but we intuit, and the very few certainties that we end getting. The things that are told to us, are to be questioned under our own analysis.

Choosing which stories to tell was very hard, too. All of them were written in notebooks, papers, or audio notes. Some of the were lost, other discarded, and others chosen to be included. In the end, I let myself be carried away by the stories that "emerged" more naturally, trying to keep a consistent theme that would give a sense of unity once you finish reading the book (or at least, that's what I tried to do!)

On the technical side, you keep using both traditional and digital techniques, and you also chose to do "Ocultos" in landscape format (not the most usual thing for a comic book). Can you tell us a bit more about your process??

Almost all my sketchbooks are landscape notebooks, I love that format. It didn't take me much time to decide the same format for the comic book: it made sense.

Lots of the stories in the book come from those landscape sketchbooks. Some were born out of an image, or others from a sentence or a concept. The process was very organic, so chaos also came into play more than once. But with blind faith on being able to resolve an artistic conflict (which I sometimes didn't even understand), everything came to order.

What did you discover and learn with this project and journey?

I learnt that along the way numberless obstacles will always appear, and being in shape is the best way to dodge them.

And last, but not least: What can we expect from Laura Perez on the next months?

I hope to keep developing more stories. Some of them very "Ocultos"-like, and others will be very different.

Thanks a lot, Laura!

NEED HELP? Visit our help center or contact us at info@drawfolio.com