SALE: first year of PRO plan with a 20% discount: 58,48$ instead of 73,10$.
We have placed cookies on your computer to help make this website better. If you continue navigating our site, we understand you accept this use.
Cerrar
sign in ESPAÑOL РУ́ССКИЙ

Recently, we told you about our visit to Colombia, and this interview is one of the first results of it. We met Luis Vasquez Elorza at Medellín, and after talking to him and discovering hist art, we knew we had to interview him for our blog. We hope you enjoy the interview and learn as much as we did!

Tell us a bit about yourself: how did you end in the world of art?

I had different creative experiences as a teenager: I was part of a theater group, and I played in a rock band along my brother and another two friends. When the time to apply to college came, I was interested in degrees like psichology, architecture, or engineering. I actually enrolled into visual arts to be able to move on to one of those degrees later, but after two semesters I found out that I enjoyed art and that I have creative skills, that I'm capable of bringing proposals to reality, and also that I'm very attracted to the poetry of images, to think about things on multiple perspectives, and combine, deconstruct, and rebuild them. With enough time this all got together, and I'm currently building my career as an artist, although there's still a lot to do, communicate, and explore.

In your art, you combine diverse techniques: maybe photography is the main one, but you also work with illustration, video, collage, sculpture. How do you decide to use each technique? What is your process?

It is odd that on different time periods we talk about artists and their art identifying them with a technique or a short range of two or three forms of expression. Actually, it's even frowned upon when an artist (or any kind of professional, I would dare to say) can solve a wide range of needs in the projects she or he works on. To be clear: I value collective work and I find it very enriching to be able to count with different perspectives on the same matter. But, about the previous matter, it is also odd that the same people critizicing this are also big admirers of people like Leonard Da Vinci, who transceded into history because of the diversity of matters and techniques he worked on. What I want to stress here is the importance of having a wide range in the creative process and face without fear the challenges that will arise. A lot of great ideas are born from passionate, daring curiosity.

About choosing a technique: I think about the concept I want to express, then I do tests and prototypes, blending posibilities that not only embrace the concept but also build and interesting image, charged with humor and satire if possible.

In many cases, photography becomes a documental resource in the process, a quick way to capture ideas that add up to the final result. Obviously, it's very important to acknowledge the power of photography as a language and a tool to bring ideas to reality. In my series "we are all hunted, every day", photography is very present due to the nature of the project. With my co-creator on that project, Juan Fernando Sánchez, we considered at some point to add visuals and documentary interviews in the project highlighting the people doing hunting on the territory, but that same people asked not to be shown in the project, so a lot of material was kept in a limbo due to ethic reasons regarding our sources. 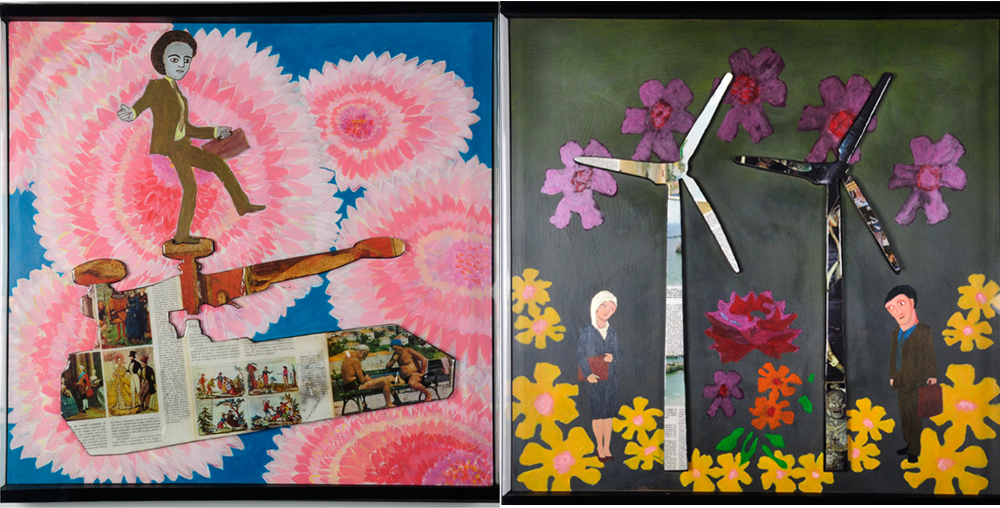 In other cases, those same elements are powerful enough, and then what you try to find is to build a silence, a kind of parenthesis that allows you to highlight something in particular, without limiting the other possibilities that arise in its relation with the expositive space and the audience.

"Homo Logo Ludens" is a series where the idea is proposed in a "retro-prospective" way (to call it something). Books become very important (although they are kind of hidden in the pieces) in the relationship between bizantine graphics, artifacts, and artificial vegetations. These series reflects on what are we doing with Life, and what is at risk for people, the environment, and the planet.

There's also another element that attracts me a lot when beginning a new project, and is the feeling of doubt, of having to experiment and re-do things until you discover an inner conciliation between the idea and the result you present to the audience.

Where do you find inspiration for your work, and how do you melt your sources of inspiration to create your own way of art?

I love streets and the rumour, they are somehow the ingredient that allows us to see beyond preconceptions: listening to your neighbour, the village doctor, the local politician, allows us to see ourselves more alike and closer to each other. Also, social media, not as a reliable source, but more like a "pit" where themes and people blend in need of expressing and identifying themselves, or just a a place to watch the trends of the moment pass, or to link thoughts to faces. It is a bit of a fetish stage, really.

On a more serious side, the sources are many: one of the artists that inspired me the most is Robert Rauschemberg. I think he and other artists from that generation did transgress a lot of aestetic and social concepts. Neri Oxman is also a more contemporary influence to me: she's a researcher at MIT with a career as wonderful as the lab she coordinates. Even if we live in the same times, I think people like her and their teams live in a different present, thanks to freedom and an environment where they can imagine and make real an alternate "reality".

Last but not least, I've always liked to supplement the creative process by reading great thinkers, or talking with friends and acquaintances, no matter their education: in the end, an art piece will face the audience without further explanation.

What do you seek to express with you art, and what effect do you want to cause in your audience?

If there's something I'm excited about is provoking awaraness and creativity. Right now, I thinks there is a tacit "hunting" or crusade agains this two concepts in society. I will show this with some characteristics of society in Colombia: one of them is the rise of numberless "churches" in a country where these kind of entities are vaguely regulated and often shadely connected to politics. I would like to think this is a personal matter, but problems arise when belonging to a community excludes you from the possibility to consider the rest of humanity which is not part of that community, thinks different, or just don't consider a role for a god in their lives, as your peers. This kind of phenomena (not only in Colombia) has derived into agression or chasing of people, or even to exile. But of course, we are talking about a country where we killed each other just for belonging to another party, or neighborhood.

The diversity seems on ocassions the enemy, that's why I think inducing thought on the art's audience is a huge achievement. After stimulating thought, I love to think on conscience, the individual act to reckon ourselves as thinkers and makers of reality, and that as I do that myself, other people around me can, too. The last level of achievement would be seeing all this vast range of creative, very diverse posibilities, which can also solve a lot of personal problems and difficulties.

In 2016 you were the winner of the Living in Peace Imaginaries Call (at Casa de la Memoria, Medellín), with a micro-tale called "El día de Don Justo" (Don Justo's Day), a very original narration. Where did this project and this unique way of telling a story come from?

Actually, I applied to this call with one of those "Bar ideas", the ones who arise sharing a beer with some friends and looking how to make an idea understandable to anyone, to bring a complex matter to a metaphor where anyone could feel identified with.

I think that when we understand things and see ourselves as part of a whole, and not the center of things, minds open to change and we are able to realize that, in order to stop a toxic habit, we must recognize the frame that brings us to allow that toxic habit.

That's why I chose the human body as stage to build the narration, and body organs as actors who are going through an illness in their relationship, due to the unbalance between reason (brain) and emotion (heart). Everything leads to a happy end, product of mutual awareness and respect, which is key to society as a living organism that depends on nature and culture.

If you want to know more about this project, you can read more on my website.

This year, you are working on a project called D-COSYSTEMS, with a very powerful subtext about our consuming habits, about their (impossible) sustainability, and about the biosphere resources. Can you tell us more about that?

This is project on which I have been working for a year now, and comes from blending different images that came to my mind: the environmental crisis, the rubbish island in the pacific, the extinction of various species, and our limited insight on the supply chain of the things we consume, with a special focus on packaging.

We all buy things every day (actually, there are fewer days in a year where we do not buy anything that the ones we do), and in a growing proportion they are food & drinks products, with their bottle, or wrapping plastic, or packaging. You consume those products in a few minutes, and then what used to be the guarantee of quality of the product, it's now instantly rubbish.

All this stuff comes from somewhere, and came from some resource on the planet, but we are giving it back to earth as a time bomb. There are more and more species dying each day because of the invading of their ecosystems by the garbage we produce.

Last, but not least: any advice to people aspiring to become an artist?

It's very important to pay attention the voices supporting you on your art career, because there are plenty of people that will already point out art as a no-future profession. No way! We must realize that there is failure and success in every discipline, and that a lot of people got to develop a language on their own thanks to their stubborness. Jobs, Bill Gates, or Dalí did that. There is a quote from Mark Twain that illustrates that: "A person with a new idea is a crank until the idea succeeds.". Success must be also a personal building process.

Thanks a lot, Luis!

NEED HELP? Visit our help center or contact us at info@drawfolio.com